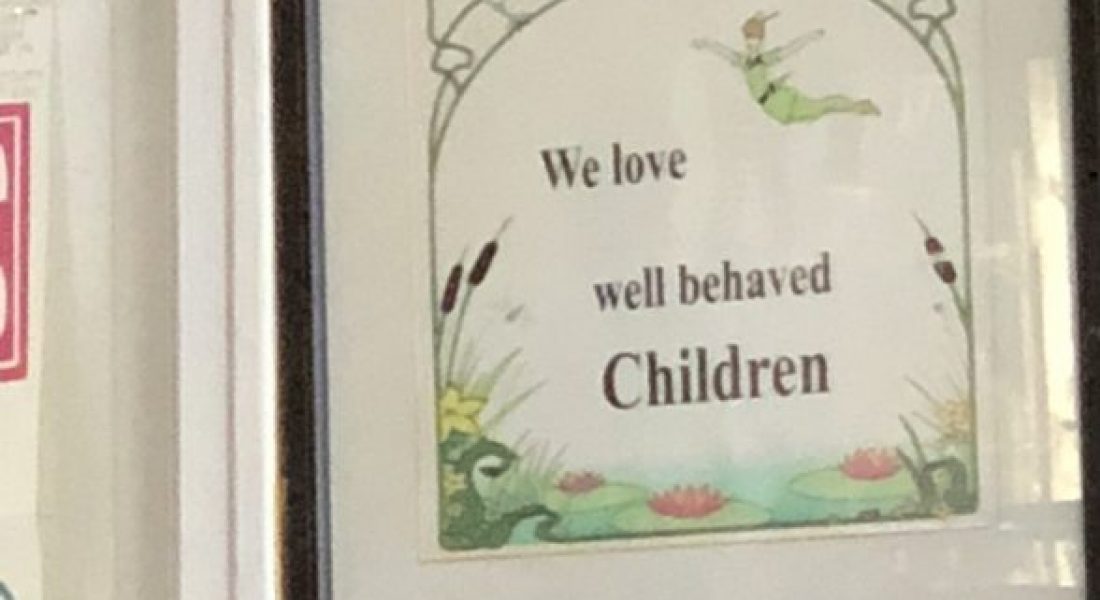 I was in line at the counter, just about to order when I saw it. I went through a cycle of emotions in the few seconds it took to read it. Shock. Anger. Sadness. And then fear. Yes, fear. What was I afraid of, really? That my child would act like… a child?

It was a sign. Five words printed on an 8×10 piece of paper. Framed and hanging on the wall of a pizza parlor.

I forgot my order. Mumbled the first thing I read when I looked back at the menu. Then turned to my son. My sweet son, who was teething and hungry. I was actually fearful he’d soon become one of the ill-behaved children that the sign was passive-aggressively warning me about.

I think I felt threatened. There were four men at and around the counter and nearby pizza oven. I was alone with my child. No, I didn’t fear for my safety. Rather, I somehow reverted to a little girl who’s afraid of getting into trouble.

I didn’t know if I should turn and leave. Jump the counter in a single leap and start a fight (kidding). Or flip them the proverbial bird in my mind and stay for lunch. Like my son and I had every right to do, no matter how he behaved.

I chose the latter. We stayed. Ate our pizza. He was actually quite well-behaved and surprisingly neat.

Of course I think my child’s perfect. He’s my child. I’m also aware that the rest of the world doesn’t share my attitude, nor do they need to. Some people aren’t kid people. I can respect that.

However, babies and children are part of our society. That’s not going to change. Ever. And these tiny humans deserve to be out in public with the rest of us.

Yes, I understand the frustration it can cause. I don’t think anyone enjoys when a child screams incessantly. But it happens. Once upon a time, before I became a mother, I recall being irritated by a howl in my ear when all I wanted was to eat in peace. But I always understood.

If you want a controlled environment, complete with peace and quiet, go to a library. Or stay home. The rest of the world is bustling with noise. Laughter, tears, arguments and yes, even children.

As a parent, I do my best to keep my child from running amok in public. Or screaming inside restaurants and stores. We work to teach him the difference between inside and outside voices. And continue taking him out so that he’ll learn how to behave in public.

My husband and I also get on our hands and knees to clean up the floor beneath him before we leave. Is he a perfectly behaved child? No. But that’s okay. He’s 20 months-old. Even Prince George and Princess Charlotte have been known to act like a “typical kid” or throw a public tantrum.

Also, we don’t let him yell and throw things while we ignore him. We behave like responsible parents. I’m not quite sure how that fits in with this sign’s message. Maybe it needs an addendum at the bottom: “Parents who address screaming and food throwing are exempt from judgement.”

I never hesitate to bring my son along with me most anywhere I go. I also seek out kid-friendly establishments when possible. In fact, this restaurant was overrun with kids from a nearby high school, one who actually had his feet up on a table. Maybe he didn’t read the sign.

Does hanging that sign mean the restaurant simply assumed kids aren’t well-behaved? No benefit of the doubt. Young equals bad… without the proper warning of a sign.

It was off-putting and I won’t be back because of it. On the other hand, when I relayed the story to my husband he had a different opinion. He pointed out that not all parents make the effort to keep their kids from wreaking havoc in public. He saw the sign as more of a reminder versus a threat.

Have you ever seen a similar sign? How did you react?