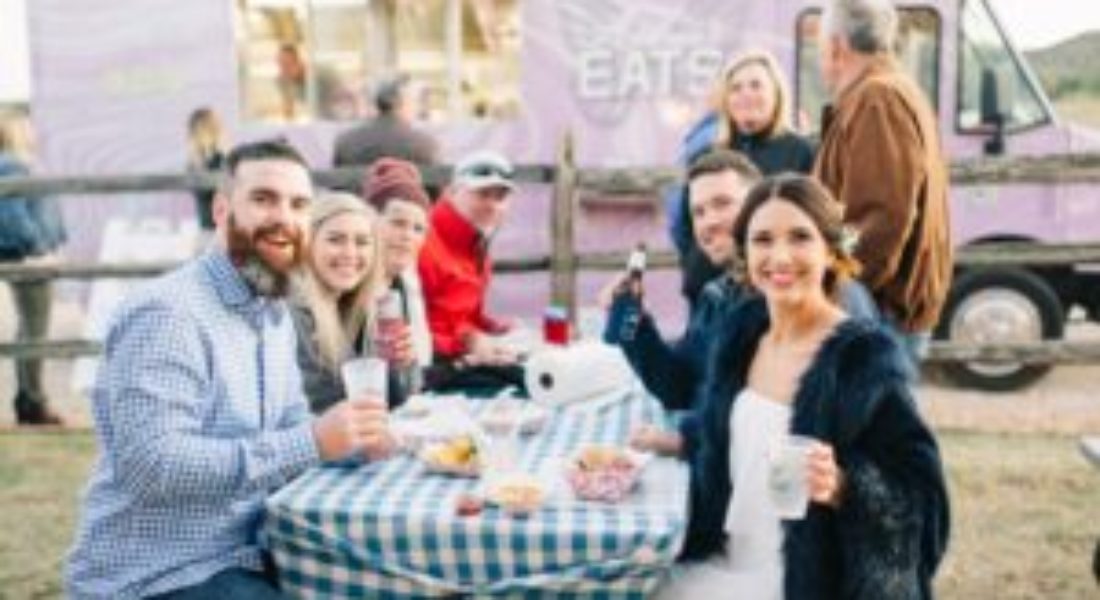 What started as searching for her friend’s lost engagement ring at a bachelorette turned into the meet cute of a lifetime for Christina Pickering. Retracing steps brought her back to the Austin bar her now husband Henry Hedges worked at: “The maid of honor ended up finding her ring on Sixth Street, and that was after Henry and I exchanged phone numbers to try and connect to see if they found the ring later on,” she says. Though the search was over, Christina says they became inseparable after that moment, and his move up to Dallas shortly after saw the start of their relationship. Henry proposed at the Dallas Arboretum in December of 2018, and the pair tied the knot on Oct. 26, 2019.

With family in Texas, Montana, Germany, and Denmark, Christina knew she wanted a fun long weekend to soak up the time with her family all in one place. They landed on The Lodge Event Center in Fredericksburg for their ceremony: “The very first trip that we took together was going to visit Fredericksburg, so it was really special to both of us,” she says. With over 30 cabins on site, most of their family got to stay with them across the long weekend. The pair rented food trucks for Friday’s rehearsal dinner — including an Amy’s Ice Cream truck from Austin to pay homage to Henry’s hometown — and spent the night with their loved ones from across the globe. “We really wanted that kind of fun atmosphere, versus doing a sit down dinner or anything like that, and we wanted it to be something that all of our guests could participate in and be a part of,” Christina says.

The couple took part in Polterabend, a German wedding tradition, at their rehearsal dinner. The custom is built on the idea that “shards bring luck,” so each guest brought a piece of porcelain to break that night. “That’s supposed to symbolize the shards bringing a couple luck, and then once everybody’s broken all of their porcelain dishes, then the bride and groom have to sweep it up together,” Christina says. “That symbolizes them having to work through their first obstacle together, and that’s supposed to bring the couple good luck.” The couple also took part in a log cutting ceremony at their reception: “That really is to symbolize, okay, now you’re married and this is another obstacle that you guys have to face together,” says Christina. “So we cut the log together, and then once it’s done, then we’ve symbolized that we can work together peacefully.”

Christina paid homage to her German family during her ceremony, too — the candle they used for the unity ceremony was made in Germany and blessed by their church before being brought to Texas.

“I just love the sentimental value of weddings, so it was really important for families to be involved,” Christina says. From a first look that involved Christina’s brother and the pair’s grandparents walking down the aisle as flower girls and ring bearers, family members played an integral role in Christina and Henry’s big day. Henry’s groomswoman did a ceremony reading, and Christina’s lifelong friend sang “How Long Will I Love You.” Even Henry’s groom’s cake, which Christina surprised him with, honored his roots with his family crest. “He always said that he wanted to add the swords to it after he got married, so we went ahead and did that as part of the groom’s cake,” Christina says.

Bringing both her American and European family members together — and getting to include them in such a meaningful way — is what Christina cherishes the most about her wedding weekend. “Having those memories and those photos was definitely the most special to us,” she says.