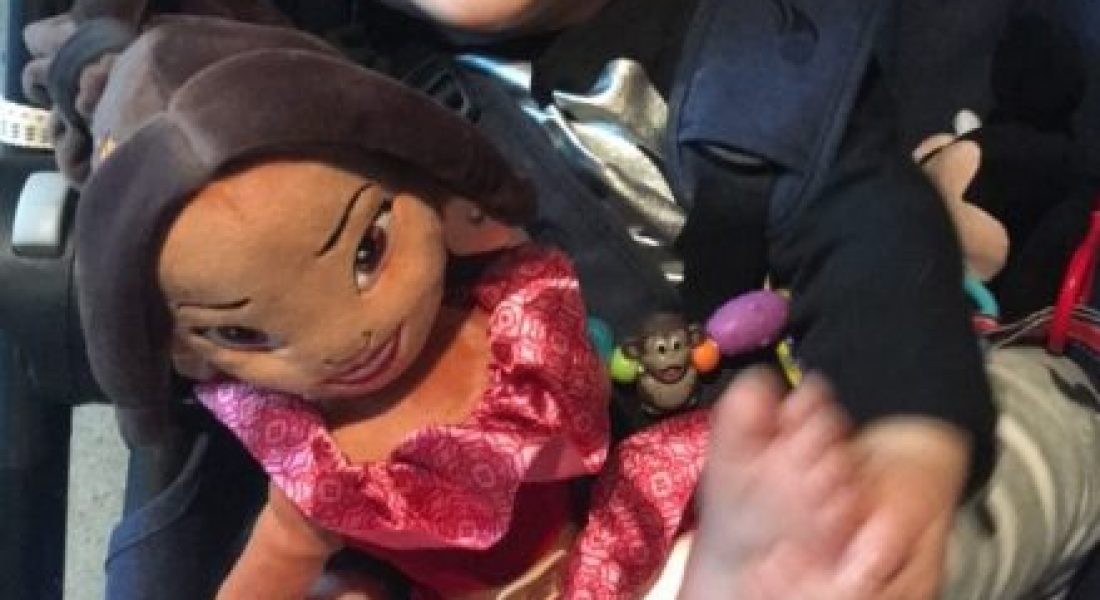 Feminist. To me the word means compassion and equality. To others it’s just feminine. And, if I’m being honest, I’m tired of explaining that the books I read my son will not, can not make him gay.

But I digress. Let me begin at the beginning.

We took my son to Disneyland when he was 8 months-old. He squealed with glee when he saw an Elena of Avalor stuffed doll. It was an adorable reaction, and we bought it for him as a souvenir. We also bought him a car he liked, but that never seems to come up or be acknowledged if someone sees it.

We weren’t looking for what might be described as “boy” or “girl” toys. Simply, toys he liked. It seemed irrelevant to us. Like I said, he was 8 months-old. Chewing his feet nonstop at the time. It was a toy that he liked, period — well, almost as much as he liked his toes. Yet a few weeks later an acquaintance saw him with his Elena doll and snidely laughed.

“Are you trying to make him gay?” she asked.

The mama bear inside me awoke and a guttural snarl began to emerge from my throat. Just then I felt a hand rubbing my back. My husband, in an “I got this,” gesture.

His point was made. Concise and with humor. I wish I could say that’s the first time we’ve been asked that question. I doubt it will be the last.

What we are consciously trying to do is raise a compassionate human being. One who exhibits kindness. Isn’t that what every parent wants? We also want him to know that everyone is equal. Some people press further for a label. So here it is:

He’s 20 months-old. He still chews those feet on occasion, so we’re approaching it the best way we can. How we talk. Act. The books we read to him. As he gets older we’ll have more frank conversations with him. About respect, boundaries, bodies and equality.

I don’t walk into rooms ringing a bell and wearing a sandwich board announcing it. But it comes up. It goes one of three ways:

It’s hard to answer those questions. Some seem based in genuine curiosity. Yes, he can play sports if he wants. Take dance lessons. Do all or none of those things.

I also want him to grow up supporting and respecting his female counterparts. To not learn some of the gender stereotypes I fight each day. In our home daddy does the cooking and mommy takes out the garbage. Mommy stays home and daddy goes to work. He works for a very smart and strong woman, whom he respects very much.

I know there are differing ideas of what it means to be or raise a feminist. My concept grows and evolves all the time. I read about it. Talk with others. My husband and I also discuss it and sometimes we disagree on the best approach.

My husband believes in leading by example. He says we can’t just tell our son to not steal or hurt others. We also have to show him. And that goes for all areas of his life. He is teaching him by living true to his word.

I agree. And also supplement with books. Shirts with female-positive messages. Maybe I’m more sensitive as a woman, but I’ve always found our world to be about men and their accomplishments. I’m trying to balance the scales.

Yes, my son has dolls. He picked them out. He also has cars. Dinosaurs and play food. He has a set of kid-sized cleaning tools. Sometimes he pretends to clean. Other times he uses them as drumsticks.

This is our approach. What works for us, what we believe in. It’s not for everyone and that’s okay.

We’re not trying to “make” him anything. Just a good person. Isn’t that all any parent tries to do?

Have you had your parenting approach questioned? How do you handle it?