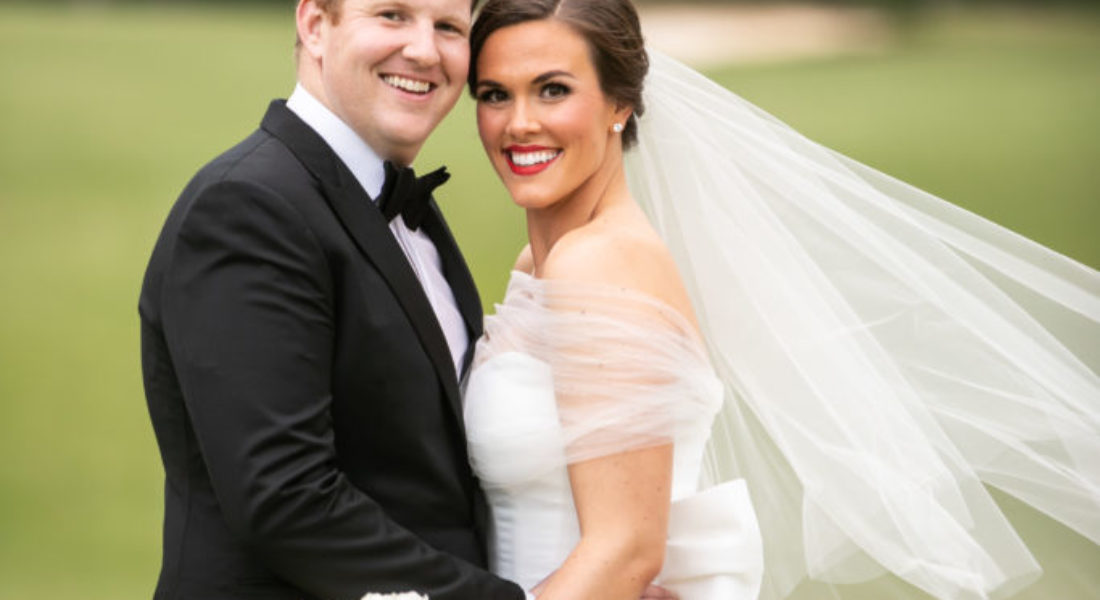 Margaret and Mike Reinbold married at Park Cities Baptist Church on a beautiful February day in 2018. Their red-hued reception at Brook Hollow Golf Club was inspired by Margaret’s favorite color. (We loved the wedding so much, we featured Margaret and her bridesmaids on the Winter 2018 cover.) Today they reside in Dallas, where Mike works as a financial advisor for UBS, and at the time we chatted with them, they were awaiting the arrival of their baby boy. We caught up with the couple to hear their favorite moments, do’s and don’ts, and respective surprises from the wedding day.

What was the smartest thing you did while wedding planning?

Margaret: Hire the right people. Rachel Derman, Paige Chenault, and Charles Redin were the most dynamic team I could rely on and trust implicitly.

Mike: Leaving it all up to my wife and her mother.

What was the hardest part about wedding planning?

What stressed you out the most?

Margaret: The weather—February can be so hit or miss. Thankfully we were blessed with a gorgeous, sunny day.

Mike: We had family and friends fly in from all over for our wedding weekend, so it was important for me to get time with everyone.

What was the most fun part of wedding planning?

Margaret: Working with amazing people. When choosing our vendors, I thought about people I wanted to work with and spend time with. For example, the girls from Three Branches Floral were remarkable and made every design meeting fun.

Mike: Choosing the band. Then once we hired Jordan Kahn, it was working with them on the music.

What was the most worthwhile splurge?

Margaret: My dress. [She wore Viktor & Rolf from Warren Barrón.]

Was there anything that the other wanted that you weren’t so sure about but it ended up being great?

Margaret: Mike really wanted a churro bar instead of a groom’s cake. Brook Hollow nailed the execution, and it was such a fun treat.

Mike: The videographer for the rehearsal dinner.

Margaret: Saying our vows. Also, dancing on stage to one of Mike’s favorite songs by Avicii. Jordan Kahn Orchestra did the best job.

Mike: The doors opening of the church and seeing my bride walking toward me.

Margaret: It was very important not to do a first look. I wanted the first moments seeing my groom to be when he was at the end of the aisle. Before the ceremony, John Sargent was taking my pictures in front of the church, [and] over my shoulder, I saw a line of groomsmen and was terrified Mike was about to see me, so I picked up my big dress and started running. Mike was tucked away safely in the church as I should have known, but it did cause quite the scare.

Mike: Margaret and I spent the whole night on the dance floor, but I did not expect her dress to be that heavy or warm—it was a big skirt on her dress. I figured if she could handle it, I could too, and we danced the night away sweaty and all.

Favorite part of the honeymoon? [They spent three weeks in southeast Asia.]

Margaret: It is better than I could have ever imagined.

Mike: It is more fun.

The post Where Are They Now appeared first on D Weddings.