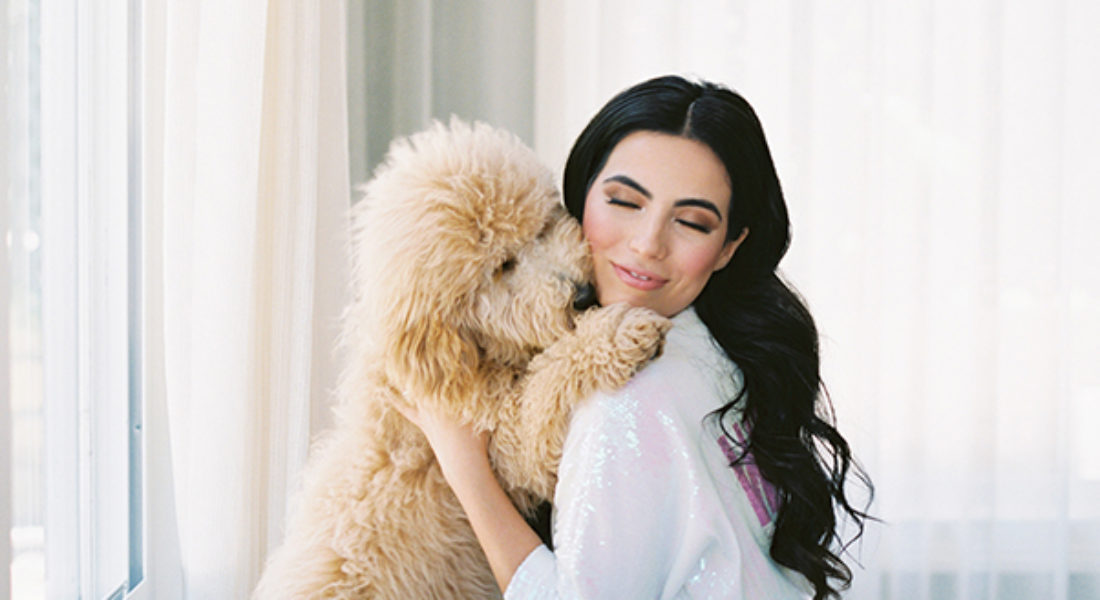 Jacky Barragan and Jeffrey Matthews were first set up by their families, but by their second date, they spontaneously found themselves at a quinceanera, belting Spanish songs. The couple continued dating long distance while Jacky and Jeffrey attended Harding University and Oklahoma City University, respectively. “Sometimes I would go to the nurse to get excused from class and drive 10 hours to see him for five,” says Jacky. Jeff proposed before family and friends at their weekly dinner spot, and nearly a year later, the two wed at Knotting Hill Place on July 19, 2019, with an affair that was “fancy and a little Latin.”

“I knew that after we got married, I wanted to get a dog ASAP,” says Jacky. They got their mini goldendoodle, Georgie Matthews, a few months before the wedding.

Jacky spotted the dress of her dreams a year before even meeting her future husband. It was a classic and simple Vera Wang ball gown. “Whenever I watched Bride Wars as a young girl, I remember seeing Kate Hudson in that gorgeous gown and thinking to myself, ‘I hope when I get married one day, I wear a Vera,’” says Jacky.

A Nice Day for a White Wedding

Both Jacky and Jeffrey wanted their wedding to be “classic, white, and crisp.” Since Jacky’s favorite color is white, the majority of their decor was neutral with a few hints of black.

The newlyweds kept their wedding bands classic but unique by enlisting the help of Lisa’s Gold and Diamonds, a family jeweler in Georgia. As a surprise, Jacky engraved the inside of the band with “I love you forever,” a saying the two share often

In honor of Jacky’s heritage, a mariachi band helped welcome guests during the cocktail hour. To make it even more special, Jacky’s grandmother chose the songs they performed.

The denim jacket was a last-minute find from Nordstrom and one of Jacky’s favorite keepsakes from the wedding day. She had it embroidered with “Mrs. Matthews” and picked it up just two days before the wedding.

The post Jacky Barragan and Jeffrey Matthews Say “I Do” in a Day That’s Fancy and a Little Latin appeared first on D Weddings.