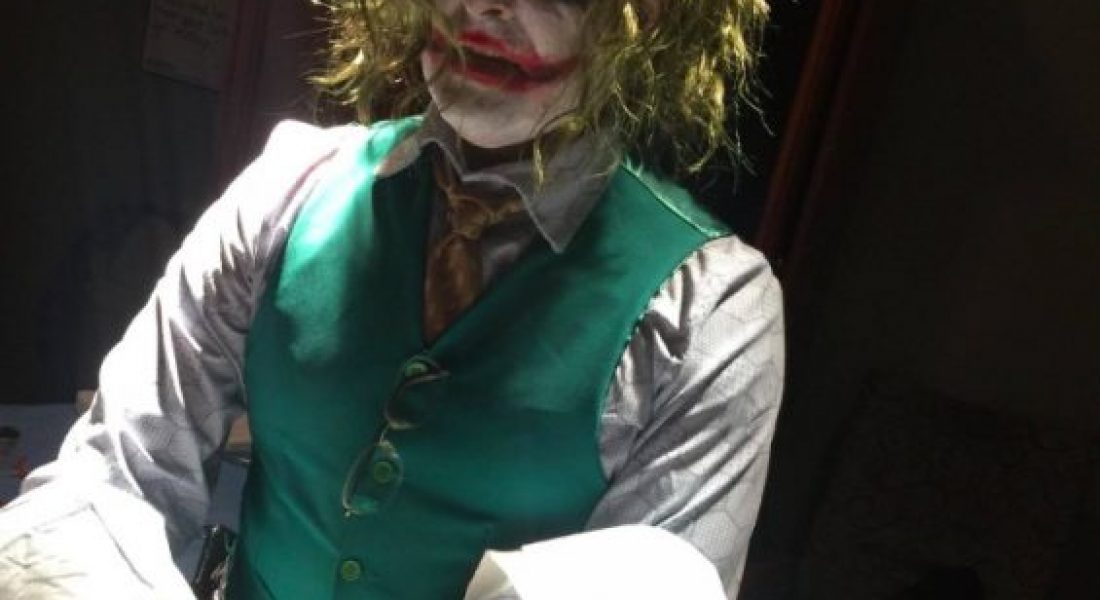 Justin Selph and his wife, Brittany, expected their third child to arrive November 5. Turns out baby girl had other plans and made her big debut on Halloween — while the doctor was in full Joker costume.

Take a look at these one-of-a-kind birth photos…

It all began Halloween morning when Brittany woke up and realized her water broke. They headed for the hospital only to discover their doctor was going all-out for the holiday.

“We found it very humorous and a were little excited that we would have a baby delivered by the Joker,” Justin told BabyCenter while sharing their birth story. “In fact, I mentioned to my wife, that I should go get some face paint and fix her up as Harley Quinn.” Though he didn’t, he insists it “would have made the story that much sweeter!”

As Brittany labored the doctor explained he would go home to pass out a bit of candy and change clothes — and that’s when she said, “Aw, we would hope that you wouldn’t change.”

When the time came to push, the doctor returned in full Joker attire to deliver baby Oaklyn.

“There my wife is, staring the Joker straight in the eyes while delivering our baby, what a sight,” Justin told us. “I was holding her leg up, and snapping pictures! I was going to go Facebook Live, but the nurse cut me off!”

“The doctor was a great sport about the whole situation and took photos with our family.”

Justin went on to tell BabyCenter: “The next morning, he came in to check on Brittany, and he said, ‘Sorry I couldn’t make it in last night, glad to see the delivery went well.’ Jokingly of course. He also gave her a card of congratulations, and he signed it ‘Dr. Joker.'”

Unbeknownst to the couple, someone claiming to be a cousin of Brittany’s shared the images of this unique birth on Reddit. The post quickly climbed to the front page, gaining thousands of upvotes and comments.

Justin can’t quite say if their images were stolen because he did share the story with their local news station, but he and Brittany were clueless they were truly going viral until a reporter from Australia reached out for their story.

“It very well may be a cousin, but we haven’t heard from any that we communicate with on the regular,” he told Babycenter with a laugh. “It may be one of those ‘lottery cousins’ that seem to surface when someone wins a bunch of money!”

How would you feel about the Joker delivering your baby?