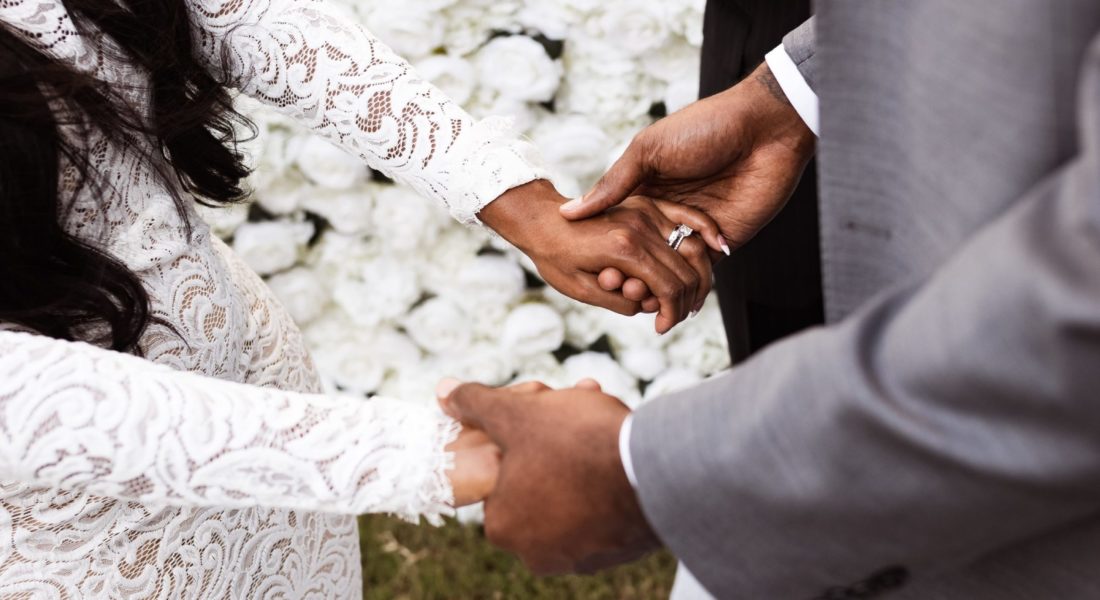 There are short engagements…and then there area really short engagements, as in five days short. This is exactly what Dallas couple JaLisa Jefferson (Vaughn), 27, and Cory Jefferson, 29, wanted when they got engaged May 15 and had their wedding just five days later May 20.

Jalisa, a content creator and blogger, and Cory, a professional basketball player in the LBA, had been dating just over a year when he proposed. Whenever the topic of marriage came up, they always agreed that if they made it to the altar, it would be a short trip. “We used to joke around that if we ever got married, we would only be engaged for a few hours and then just head to the courthouse,” JaLisa says. “When the pandemic hit, we both realized what is important and decided that a small wedding with only family in attendance would be better—something special with only the people closest to us. When we got engaged, we knew right away what we would do. We have seen so many people plan these massive weddings and end up stressed out throughout the entire process, as well as spend more money than they even have. All of this only to have that one day pass by so quickly, and they were too drained to enjoy it. We always said we would focus on our foundation, the state of our marriage, and setting ourselves up for the future.”

Fortunately, Jalisa’s mom, sister, and other family members were in on the engagement surprise, so plans were underway for a romantic engagement without JaLisa suspecting a thing. Although JaLisa and Cory were certain they wanted to spend the rest of their lives together, she had no idea when or how Cory would propose. “I gave him a few hints about rings a few months before, but he never said much about it,” she recalls. “Once COVID-19 hit and everything closed, I figured there was no way he could get a ring or do anything special, so I kind of put it out of my mind. We meet every Thursday with my family for a Bible study, and it was one of those days where I wasn’t in the mood to leave the house, and my parents insisted we needed to dress up for family photos before the Bible study so my dad could submit them at work (American Airlines) for a giveaway and feature about families of frontline workers. Lo and behold—it was because they had all of this planned.”

Because JaLisa is a professional blogger, she knew that she and her family had plenty of professional pictures to use for this project, so she felt even more frustrated about getting dressed up for a regular family Bible study. Her frustration quickly faded when she walked into her parents’ beautifully decorated home with everything perfectly set up the way Cory envisioned—and JaLisa was dressed for the occasion! “My mind was blown,” she says. “Cory was down on one knee right when I walked in the front door. My jaw dropped! I didn’t even catch on when my mom had suggested that I wear press-on nails for the photoshoot, because we hadn’t been able to get our nails done during the shelter-in-place orders. But my mom knew I would want my nails done before a proposal!” The ring was exactly what JaLisa had hoped for. Cory asked a friend to sneakily get JaLisa’s ring size, and he “shopped” her Pinterest board for inspiration for a ring style. Once the surprise and celebration calmed, the couple quickly thought it over and decided it would be special to get married on the one-year anniversary of the day they met—just five days away. The wedding planning began that instant.

JaLisa ordered a dress online she thought would work for a small, at-home wedding and rushed the shipping. She tried it on, and it didn’t work. As a blogger, she often gets unique opportunities to try and promote a variety of fashion lines. About four months before they were engaged, Australian wedding gown designer and online retailer Grace Loves Lace reached out to JaLisa to see if there was a gown in their line that she may be interested in wearing one day for her wedding. “I wasn’t engaged at the time, and to my knowledge, there wasn’t an engagement planned, so I told them I would reach out when it happened,” JaLisa says. “When the first dress didn’t work, I called Grace Loves Lace one day before the ceremony to see if I could find anything in their Dallas showroom that would fit. They were closed because of the pandemic but met me there so I could look at gowns. I got my dress the next day at 9 a.m., and the wedding was at 4 p.m.”

The Grace Loves Lace Dallas showroom manager quickly styled JaLisa the morning of her wedding day with an exquisite Orla gown—a classic, chic style that looked as if it was made just for JaLisa. “I knew we weren’t doing a big wedding, but I also knew I would want to have these memories forever,” JaLisa says. “And when trying the dress on, I just knew it was the one.”

Jalisa and Cory decided the wedding would be held in the backyard of their Dallas home. Family members took over to make the house look as beautifully decorated as only four days of wedding planning during a pandemic allows! They secured a stunning white flower wall that served as a backdrop for photos, set up balloon arches, contacted friends and family to schedule a drive-by celebration to send well-wishes, placed flowers throughout, set up a large sign in the front yard, and grabbed a sheet cake from a nearby grocery store. Cameras and lighting were strategically set up so that friends and family could join in virtually and watch the wedding via Zoom—a thoughtful addition to the Tuesday afternoon ceremony, as many people were still in the middle of their workday. “All I asked was to make the house look a little bit nicer than usual, and they went above and beyond, reaching out to vendors on social media to see what was open and what could be delivered or picked up in just a few days,” JaLisa says.

Now that the rush of the wedding has subsided, the newlyweds don’t regret the short engagement at all. Although COVID-19 wasn’t the reason for the quick turnaround, it did play a role helping the Jeffersons stay true to what mattered. “Although I do not knock the fact that some people have always dreamed of a big wedding, my mom would always say when things change, change everything, meaning you have to adjust when life happens,” JaLisa says. “We have always known, and now more than ever understand, that the marriage is the most important part of the wedding. We did just enough to have beautiful photos for memories, but you don’t have to spend thousands and thousands of dollars and plan for years to get those photos. It’s the intimacy that made the day, surrounded by people who love us the most and who genuinely care. Love is what matters, and the entire day was just for us. Now we can focus on our life, as opposed to just one day.”

The post The Wedding That Couldn’t Wait…From Engagement to “I Do” in Just Five Days appeared first on D Weddings.

The Minimalist: Sound the Trumpets

Our Favorite Wedding Moments from the Year, Plus What You Can Learn from Them

Get Inspired with This Week’s Instagram Posts We Love

The Minimalist: Belles of the Ball