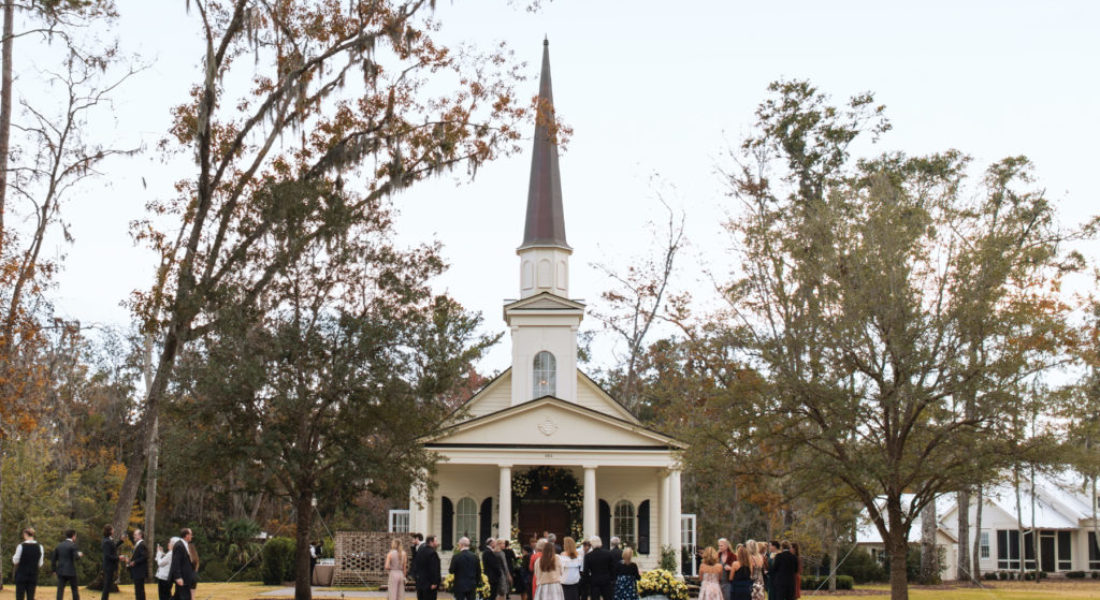 When Madison McKinley tagged along with friends to a tennis tournament in Houston, little did she know that she’d meet her future husband there. Her friends were too nervous to ask for a picture with pro tennis player John Isner, but she didn’t hesitate. “I had never been to a tennis tournament before,” she says. “I was like, ‘I don’t care,’ and I went up and asked for a photo,” she says. John scored her number, and they went on a date in London two months later. After dating for six years, they returned to Wimbledon Village to share a romantic dinner, with the night ending in a proposal in front of Madison’s favorite church.

A whirlwind engagement followed, as the couple had to plan a wedding in just six months to accommodate the tennis player’s travel schedule. Madison originally wanted to marry in Wyoming, where she grew up going to her family’s ranch. “It’s my favorite place on Earth and just my home in the sense of where I feel most alive. That’s my aesthetic for life,” she says. However, the couple couldn’t pull it off due to logistics. So for plan B, Todd Fiscus promised to bring the charm of the Rocky Mountains to the Montage Palmetto Bluff—and there just so happened to be a cancellation in December. “It was fate that the date had opened,” Madison says.

Going to the Chapel

There are two chapels on the property, and John and Madison married in the larger one to accommodate their 250 or so guests.

The bridesmaids wore Brock Collection, a designer Madison has long admired at Forty Five Ten. She originally saw the pattern on a skirt, and the designer worked with her to design gowns in the same fabric. “I wanted a pattern, not a solid,” Madison says. “I think it brings more joy and life.”

Madison’s favorite flower is hydrangea, which were incorporated in her lush bridal bouquet.

Because of the short engagement, Madison had to find a designer who could turn a design around quickly. She chose a romantic Mira Zwillinger gown and veil. “ The designer was so accommodating,” she says. “They normally don’t do that fast of a turnaround.”

Madison gifted her wedding party white pajamas, which she found on Etsy. She also invited her pup, Miss B, to join the party.

Out of the Blue

Madison’s something blue included velvet Manolos, as well as a blue sapphire ring that her parents gave her.

The couple filled the burlap welcome bags with their favorite things such as Mary Kay makeup, Niven Morgan candles, and snacks.

The monogram was carried throughout, from the aisle runner to the invitations. The branches and greenery speak to Madison’s love for the outdoors.

“I like flowers that don’t look so perfect,” says Madison. “Todd added those random wildflowers, like we had just gone to the filed and picked them.” He also utilized trees, branches, and greenery for texture.

“We had trouble getting the cake on the plate,” laughs Madison. “I think I was just laughing and happy. It wasn’t going as we planned, and I was thinking, ‘this is amazing.’”

Baskets of throws were placed at every event throughout the weekend, including the seated dinner. The weather was forecast to be chilly, so Madison and John wanted their guests to
be comfortable.

The post John Isner and Madison McKinley Bring the Charm of Wyoming With Them to South Carolina appeared first on D Weddings.