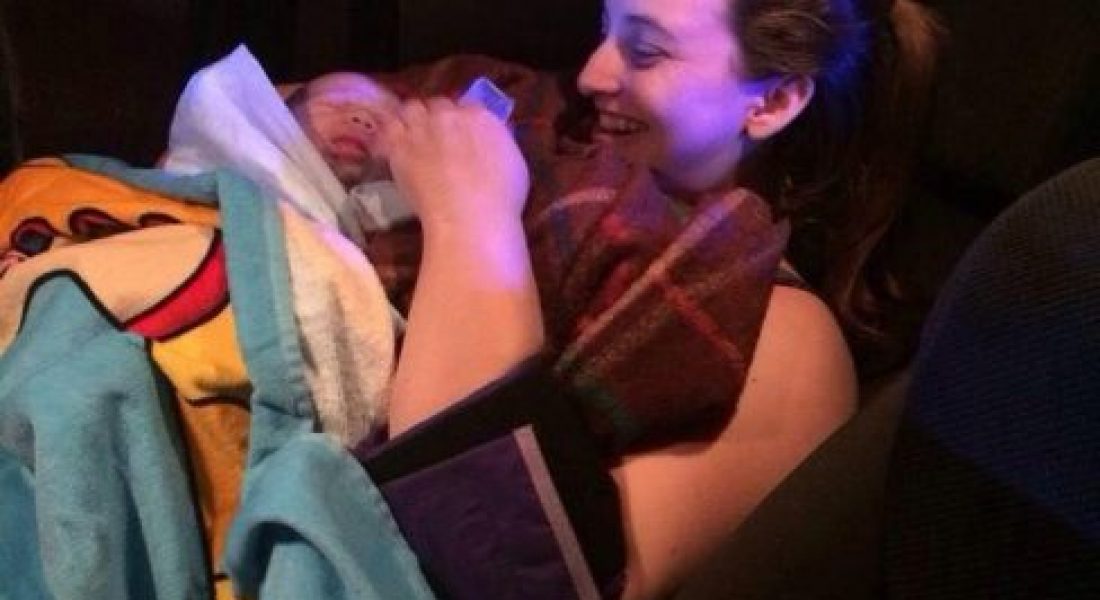 Many of us have probably read that a woman’s labor tends to be shorter with each child she has. This was certainly the case for Kaitlin Eigenmann. Except her second child came so quickly, she ended up giving birth in a car on the side of the road — with the help of seven firemen.

Her mom and dad, Ron and Cathy, left with the laboring mama for the 30-minute drive to the hospital. However, they only managed to make it 15 minutes down the road. “When my dad saw the police officer while we were driving, he asked if I wanted him to pull over, and I said yes because I just knew we couldn’t make it to the hospital,” Eigenmann told BabyCenter. “Then the fear set in. I didn’t want to say yes because I wanted to be in a hospital, but I didn’t want to be driving while giving birth, so it was my only option. I was terrified!”

What happened next was surreal, she explained.

“The police officer was in a panic. I told him, the baby was coming, and he said, ‘No, he’s not, just wait until the EMT gets here!'” Eigenmann wrote on the Breastfeeding Mama Talk Facebook page. “Right as Rylan’s head popped out, the firemen got there. One fireman delivered my son, one held my hand and let me squeeze the crap out of it as I squeezed the crap out of my mom’s hand, while the others watched in shock and awe and helped afterwards.”

From the point when her regular, painful contractions began until she was holding her baby boy, only 45 minutes had passed. Labor had lasted roughly 10 hours with Eigenmman’s first son, Elijah. So, yeah. The whole childbirth experience was just a tad quicker for baby Rylan.

“Rylan is doing great!” Eigenmann told BabyCenter. “He is 7 months old and crawling. He is always smiling, like his older brother. He’s so silly, sweet, and spunky. He is strong-willed. Whatever he wants, he is determined to get. Just like the moment he decided he wanted to be born, there was no stopping him.”

His dramatic entrance will make for a great story when Rylan gets older. And for Eigenmann, the experience is a source of empowerment she’ll never forget. “I think it’s safe to say if I can deliver a baby on the side of the road with no doctors, no medicine, and being the most scared I’ve ever been in my life, I can do anything,” she said.

Yeah, I’m going to have to second that. Thank you for sharing your birth story with us, Kaitlin. Those firetruck-butt pants are perfect — and so is your sweet little guy!

What do you think of this birth story? Did labor(s) speed up for you, after your first child?