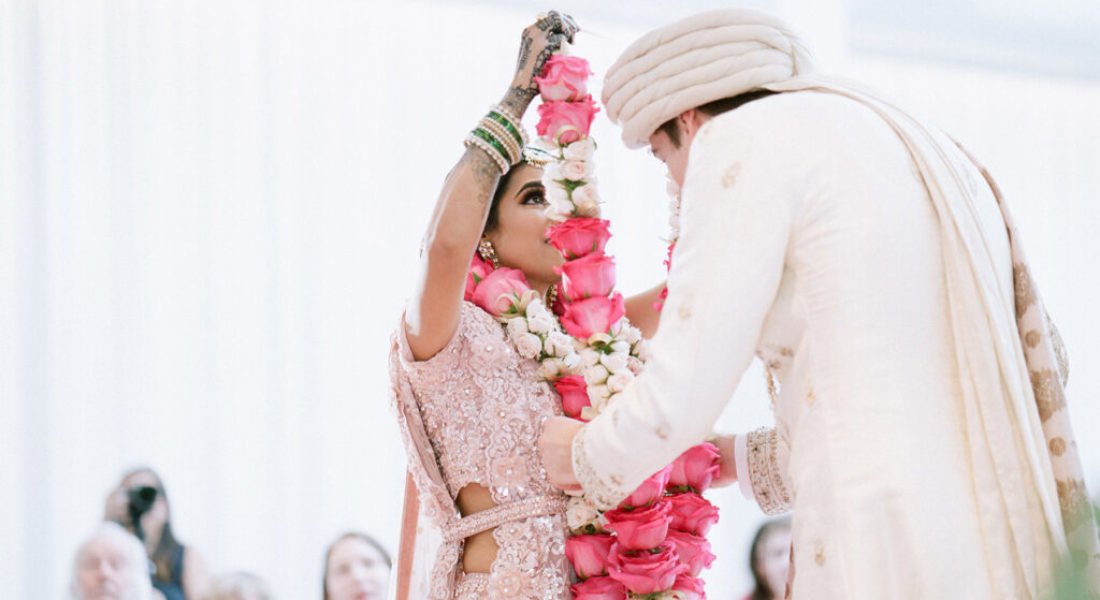 Vinita Demla and Colt Castner’s wedding day was 10 years in the making. After meeting at the UT Dallas student union, they spent five years as friends and the next five as a couple. They were engaged surrounded by her family against the stunning backdrop of Antelope Canyon and wed on November 30, 2019, at The Joule in Dallas. Vinita’s emotional walk down the aisle caught her off-guard—“I’m a pretty goofy person,” she says, but after a decade of buildup, that moment brought them both to tears. “I have only ever seen Colt cry one other time,” she says, “so to see him cry at our wedding made me cry even more.” Proud of both her family’s heritage and the American aspects of her identity, Vinita brought together Hindu and Western elements so that both sides of the family could enjoy the day. Their dreamy and romantic ceremony site offered an intimate space to observe special Hindu traditions, while entertainment abounded at the lively reception.

In order to create a fusion wedding that honored her family’s heritage while incorporating Western elements, Vinita enlisted Jignasa Patel and Sifth Ahmad of K.I. Weddings. Creative director Patel says they worked to set the tone for an intimate experience for guests. “Not so much ‘My Big Fat Indian Wedding,’ but more of a warm kind of a feel, and being able to touch everybody in the room, which is why Vinita wanted such an intimate guest count to begin with,” she says. Outlining the essential elements for the ceremony early on was key, and Vinita worked with her planners to trim down the traditional ceremony, which is spoken in Sanskrit, while preserving the most precious elements. “Vinita and I went through and kept the rituals that were very predominant from a religious aspect and a cultural aspect,” Patel says. “But we kept it very entertaining for the groom’s side, who weren’t aware of the culture and the rituals.”

Let Us Entertain You

One of Vinita’s central priorities in wedding planning was reception entertainment. “My overall vision was to have something that was just a fun event for people to go to,” she says. Sifth Ahmad of K.I. Weddings helped structure the reception events and seek out some of the best, most unique entertainers in Dallas. “There was so much for the guests to do,” Sifth says—from aerialists who served champagne to The Violin Guy (pictured above), who brought a musical element. Vinita also incorporated games to help fill time while she changed outfits. And she didn’t forget about her young guests, hiring babysitters to keep kids occupied.