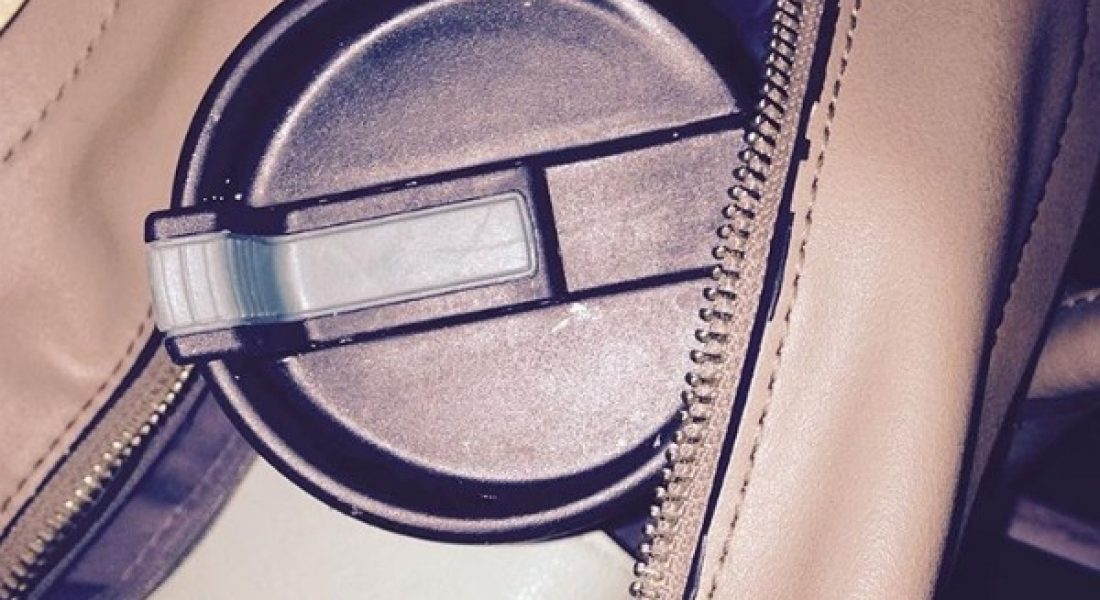 When I talk about having a Mom Purse, I’m guessing you know exactly what I mean. A giant handbag that can carry anything and everything small children might need while we’re out and about. Hand sanitizer? Check. Emergency toys for long lines and waiting rooms? Check. Kleenex? Well, of course. Latte I smuggled into a movie theater? **cough cough** I admit nothing.

Ok, so maybe there’s Instagrammable proof. I’m actually pretty proud my purse can hold an entire travel mug and still zip closed. Believe it or not, that’s not the weirdest thing I’ve kept in there.

When my sweet girl was 2, she went through a baffling phase where she kept sticking things up her nose. I have no idea why – it can’t have felt good.

After a week of dislodging raisins, a bean, and a small LEGO (using the procedures recommended here by BabyCenter experts), I picked her up from Sunday School one morning and noticed she had a runny nose. And it was blue. Everyone else looked bewildered, but I knew exactly what had happened – she’d put a piece of blue chalk up her nose. It was now smaller than when she put it in there and I couldn’t get it out easily, so we headed to the doctor.

Her pediatrician took what appeared to be extra-long tweezers and had the chalk extracted in no time. Then asked me if I wanted to keep it.

Here was my reasoning: I could always get rid of it later if I decided I didn’t want it. But if I rejected it now, I could never get it back. I don’t know why I would want it back. To put in the grossest wedding centerpiece ever? To give her on her 18th birthday? I really can’t say. But I panicked and said “yes” when the doctor asked if I wanted the nose chalk. I put it in my purse and forgot about it. For THREE years.

For three years, my mom purse held matchbox cars and crayons and wipes and even a few board books. And nose chalk.

I finally cleaned my purse out and the nose chalk is now tucked away in her memory box, where it will horrify her one day while she’s fondly sifting through her old things. But even though she’s older now, I still can’t stop myself from stashing a few crayons and wipes in my purse every time I head out the door.

What’s the strangest thing you’ve ever kept in your purse?